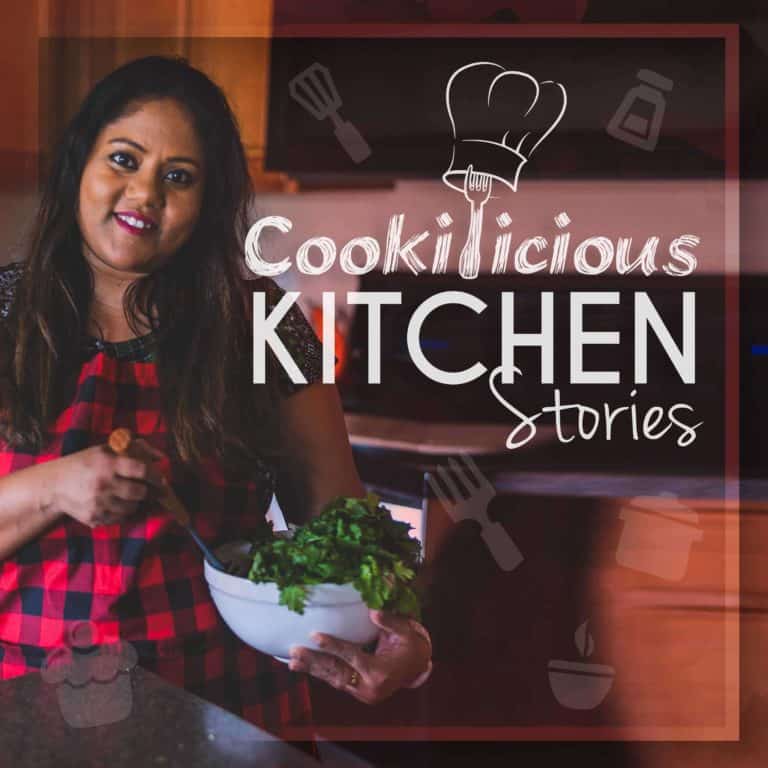 In this podcast episode, I talk about Indian Spices (Masalas) and their role in Indian Cuisine. I wrap up the episode with detailed recipes for two simple Masalas, 'Turmeric Powder' and 'Coriander-Cumin Powder'.

You can find me on Instagram, my Instagram handle is @cookilicious.
If you have any questions or feedback, please write to us at [email protected]

Episode 2 – The Flavorful World of Spices

Hello and welcome to the second episode of Cookilicious Kitchen Stories. I’d like to thank you all for the overwhelming response to our first podcast episode. I loved reading all your messages on social media!

In the first episode, I gave you a sneak peek into my world and shared how I got into the food blogging space. I also shared the recipe for a delicious Indian dessert called Paal Payasam. Do check it out in case you missed hearing it.

Since my aim with Cookilicious Kitchen stories is to take you on a culinary journey where you can become familiar with Indian food, I wanted to dedicate the next couple of episodes to the key Indian spices or Masalas that you should have in your pantry.

So let’s start with: what is a ‘Masala’? A Masala is a mixture of spices. Masalas can be ‘whole’ or ‘powders’. When a recipe calls for ‘whole Masala’ it means that the spices are used as is in their natural form.

On the other hand, certain recipes call for ‘Masala powders’. This means the spices are first dry-roasted and then ground into a fine powder. The term Masala usually refers to ‘Masala powder’. We specifically say ‘whole Masala’ when we are not referring to the powder. There are also some ‘spice powders’ that don’t quite classify as Masalas but are very important in their own right. Turmeric powder and Coriander powder are examples of such one spice powders.

You’ll find ready-made Masalas in most grocery stores or even on Amazon, but the real fun lies in making your own – which is what I’m going to show you. Homemade Masalas are the best and have some obvious advantages. Sometimes, store-bought brands may not use the highest quality ingredients, or they may use some unwanted additives or food coloring. They may also be expensive. When making at home, however, you’re in full control and know exactly what’s going into your Masalas. Also, it’s worth mentioning at this point, that all the spice mixes are naturally vegan

Indian cuisine boasts of a variety of Masalas. Each one has a specific role to play in a dish. These masalas are often times region-specific depending on the spices that grow there.

It’s common practice to make Masalas at home. In fact, it’s somewhat of a tradition that gets passed down from generation to generation. I have watched my grandmother, mother, aunt, and mother-in-law all prepare various Masalas.

Interestingly, even within the same local region, the flavor of the Masala is sometimes unique because of the human element. The kind of spices used, the ratio in which they are used, the time for which they are dry roasted, or whether they are finely or coarsely ground – all these factors together impart a distinct flavor to the Masala. That is why dishes your mother makes do indeed have that ‘special’ taste that is so endearing.

In fact, some of my most vivid and favorite childhood memories are of my mother roasting spices! Our entire house would fill with the fragrance of roasted spice! I still flashback to those days when I’m making my Masalas. Fun fact – my mother used to tell me this story of how when she was little, there were no food processors. So, my grandmother used to grind all the spices using a huge mortar and pestle, it used to take two people to handle that mortar and pestle, it was that big! How cool is that?!

Once the Masala is ready, the next important thing is storage. Back in the old days, families were larger and the consumption was more. So these spice powders were made in bulk and stored in airtight containers. Nowadays, however, families have shrunk and we tend to make smaller batches based on our needs.

When I prepare my Masalas, I prepare enough for about a month or two. I store them in airtight containers and transfer a small quantity to a ‘Masala Dabba’ or ‘Spice Box’. You will find this spice box in nearly every Indian kitchen. It’s made of wood or metal and has small compartments that can be filled with small quantities of whole and/or ground spices sufficient for day-to-day cooking needs.

There’s so more information about Masalas that I could give you. But at this point, I’m going to stop and focus on sharing with you the first three spices that you can easily make and store at home and use in your recipes.

With that, let’s talk about the first one – Turmeric powder. If you remember, we mentioned it earlier when we spoke of one spice powders.

Making Turmeric powder at home is very easy and cost-effective. We need exactly one ingredient - fresh turmeric root. 4 pounds of the root will yield approximately 1 cup of powder. It literally is just a 4-step process - wash - boil - dry – grind.  However, the drying process takes about a week, which can be a bit of a downer. But hey, no pain, no gain, right?! Here’s the process:

Here are some tips you may find useful.

Where do I buy Turmeric from? : You can find fresh and dried roots in Asian/Indian grocery stores and even leading grocery stores like Publix. You can buy it from Amazon as well.

How do I pick good Turmeric roots? : Get organic, chemical-free fresh roots if possible. Choose big, smooth roots that are mold-free.

What is the shelf life of the Turmeric root?: Fresh turmeric root has a short shelf life and you should immediately dry and powder it.

How do I grind the dried roots?: Indian food processors do the best job, but you can use a high-powered blender like a coffee grinder or a magic bullet.

How do I store turmeric powder?:  The powder stays good easily for 6 months if stored properly in an airtight container. Use a glass jar instead of plastic as it's easy to clean and doesn’t stain. Store it in a cool place.

So, now that we’ve made the Turmeric powder, let’s talk about some of the ways you can use this wonderful spice in cooking. Here are some of the dishes I’ve added Turmeric to and I’ve loved the results! I never add more than a teaspoon at any time.

Basically, feel free to experiment in your own way.

Okay, with Turmeric out of the way, let’s talk about our next powders: Coriander and Cumin Powder. Ground Cumin and Ground Coriander is a key ingredient in many recipes. These powders make in 15 minutes and can be added to most dishes to enhance their flavor.

Cilantro has a tangy citrusy flavor with a slight sweetness and a hint of earthiness. Some people however are genetically predisposed to perceive its flavor as well, soapy! Weird, right? These people bite into Cilantro and actually taste soap. The plant has some anti-inflammatory and antifungal properties and is good for skin health.

Cumin hails from the parsley family. Cumin seeds look like caraway seeds but are a bit longer and boat-shaped. They have a distinctive warm and intense earthy flavor with mild bitter undertones and a distinctive aroma that hints of lemon. Cumin is known as Jeera in Hindi and so ground cumin is referred to as Jeera powder.

We use whole and powdered cumin seeds extensively in our cooking. In fact, Cumin seeds are used for tempering and are usually one of the first ingredients added to oil along with mustard seeds. When the oil heats up, the flavor of the Cumin is released into the oil. Unlike raw cumin seeds, roasted ground cumin can be added at any time to a recipe as heat is no longer required to release the flavor.

Cumin is good for the digestive system. It keeps acidity and bloating away and is also great for stomach aches. It’s great for healthy skin and hair. Since it has high iron content, it is sometimes used to treat anemia. It also has detoxifying properties. A popular Indian tradition is the consumption of Cumin Water, basically, the water strained after boiling Cumin seeds. A lot of people start off their day off with this concoction to realize the health benefits of Cumin.

You can purchase coriander and cumin seeds from most grocery stores or on Amazon. Once you open the packaging, please make sure to store them in airtight containers in a cool, dry place.

The process of making both these powders is two-fold.

Step 1: Dry roast one cup of cumin seeds in a pan on a low flame. You will need to roast the seeds until you get a faint aroma from the cumin seeds and they turn a little darker in color. Keep stirring continuously so that all the seeds are evenly roasted. Once the seeds are roasted, let them cool completely.

Please be careful not to burn the seeds when roasting them. It will make the powder taste bitter. Also, do not let the seeds cool in the pan itself. Transfer them to a plate.

Step 2: Once cooled, grind the roasted seeds to a fine powder.

Voila, the cumin powder is ready. Do the exact same thing with the Coriander seeds, dry-roast, cool, and grind to a fine powder.

One cup of seeds will yield approximately ¾ cup of powder. Store the powders in air-tight containers. You can also create a Masala by mixing these two powders. That’s right, the Masala is simply called Dhaniya-Jeera Masala and it’s a rather popular one.

Back in the old days, my grandmother used to leave the seeds under the sun for a couple of days and then grind them using a mortar and pestle. But I think it’s safe to say our method is faster. In fact, you can also try roasting the seeds in the microwave. Try doing it for 3 minutes, but in 30-second increments. Since every microwave is different, you’ll have to keep checking to make sure the seeds don’t burn.

Both these powders taste great in curries, gravies, salads, stir-fries, rice dishes, stews, soups, and dips. The sky’s the limit! You are only limited by your imagination.

Okay folks, with that we’re going to wrap up this podcast episode. We talked about a variety of spices and their benefits and uses. We walked through the recipes for 3 spice powders, Turmeric Powder, Coriander Powder, and Cumin powder. We’ll be back in two weeks with a new podcast, where we’ll conclude our talk about spices with a couple of more important Masala recipes.

We have all the relevant blog links in the show notes. If you have any questions, or feedback then please do let us know.

1shares
GIFT FOR YOU 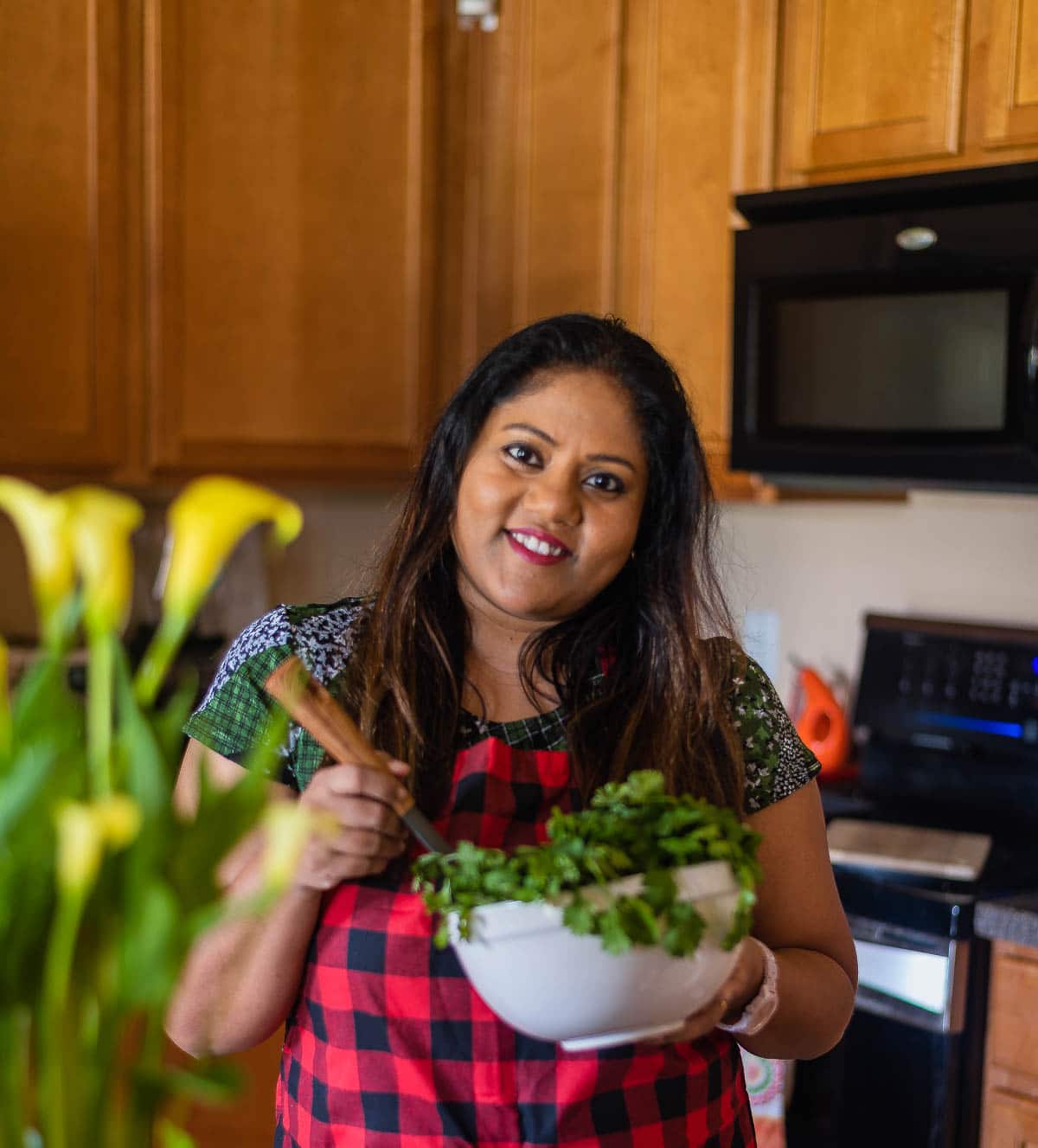 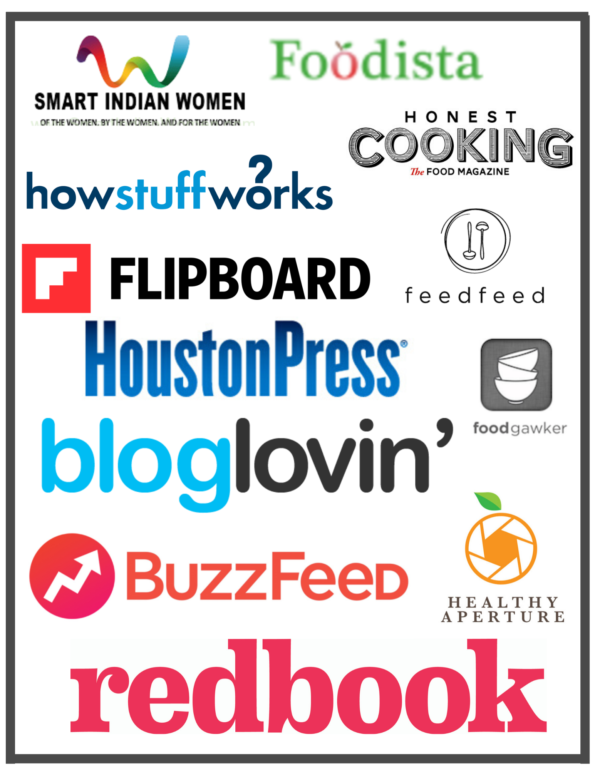 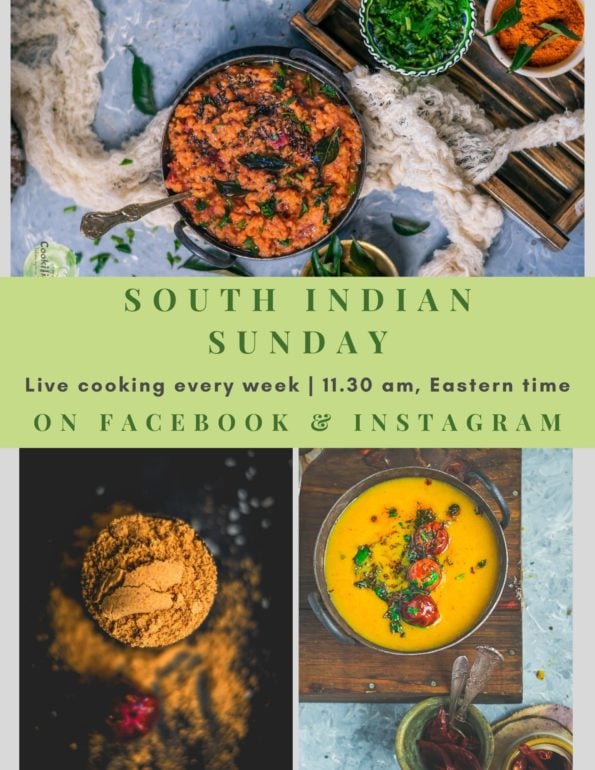 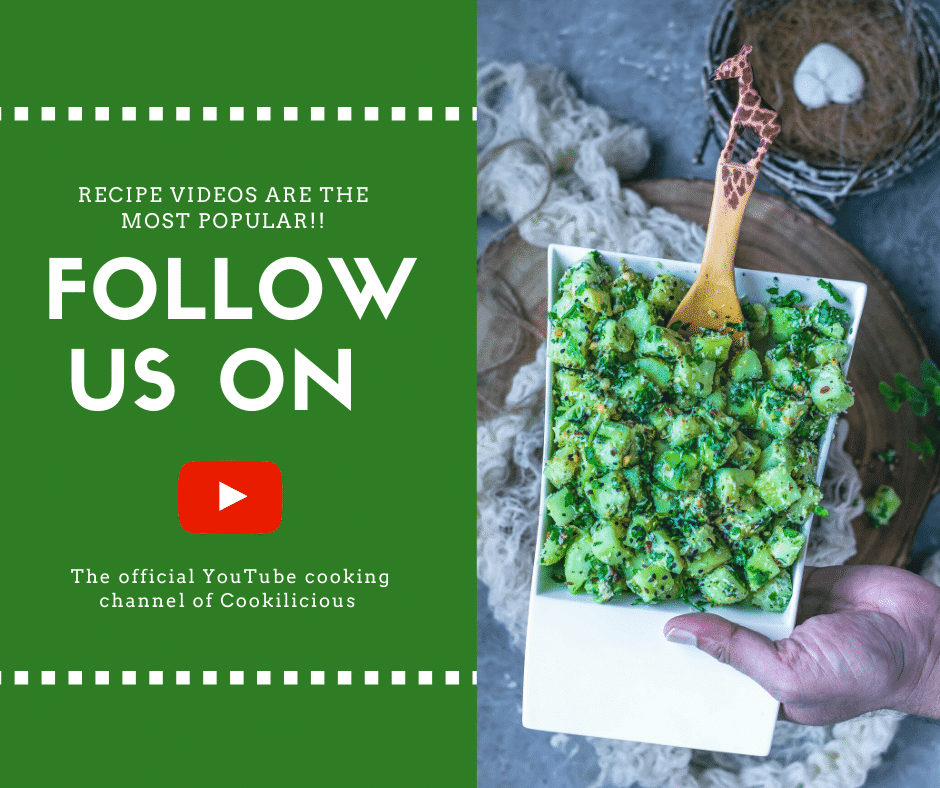 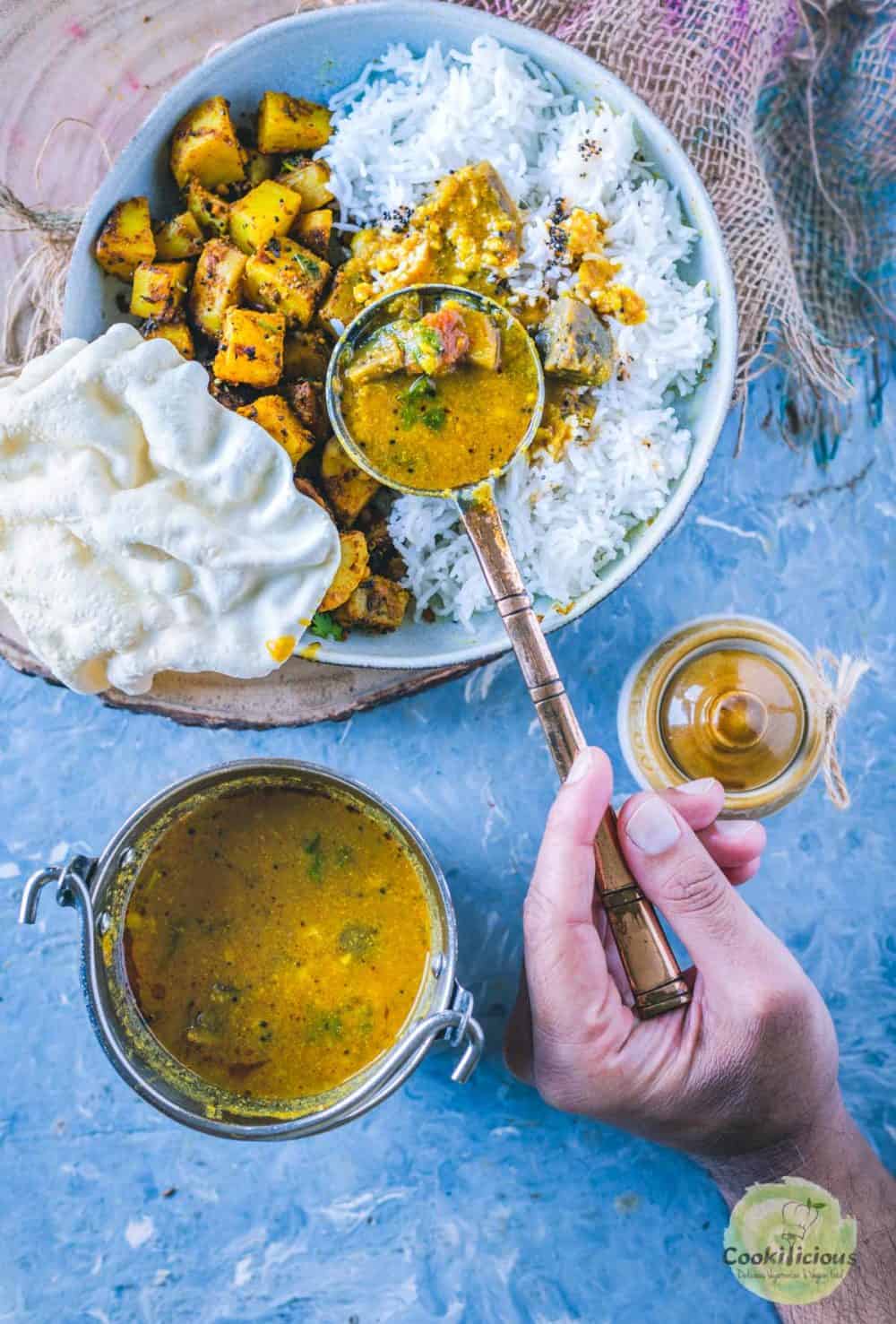 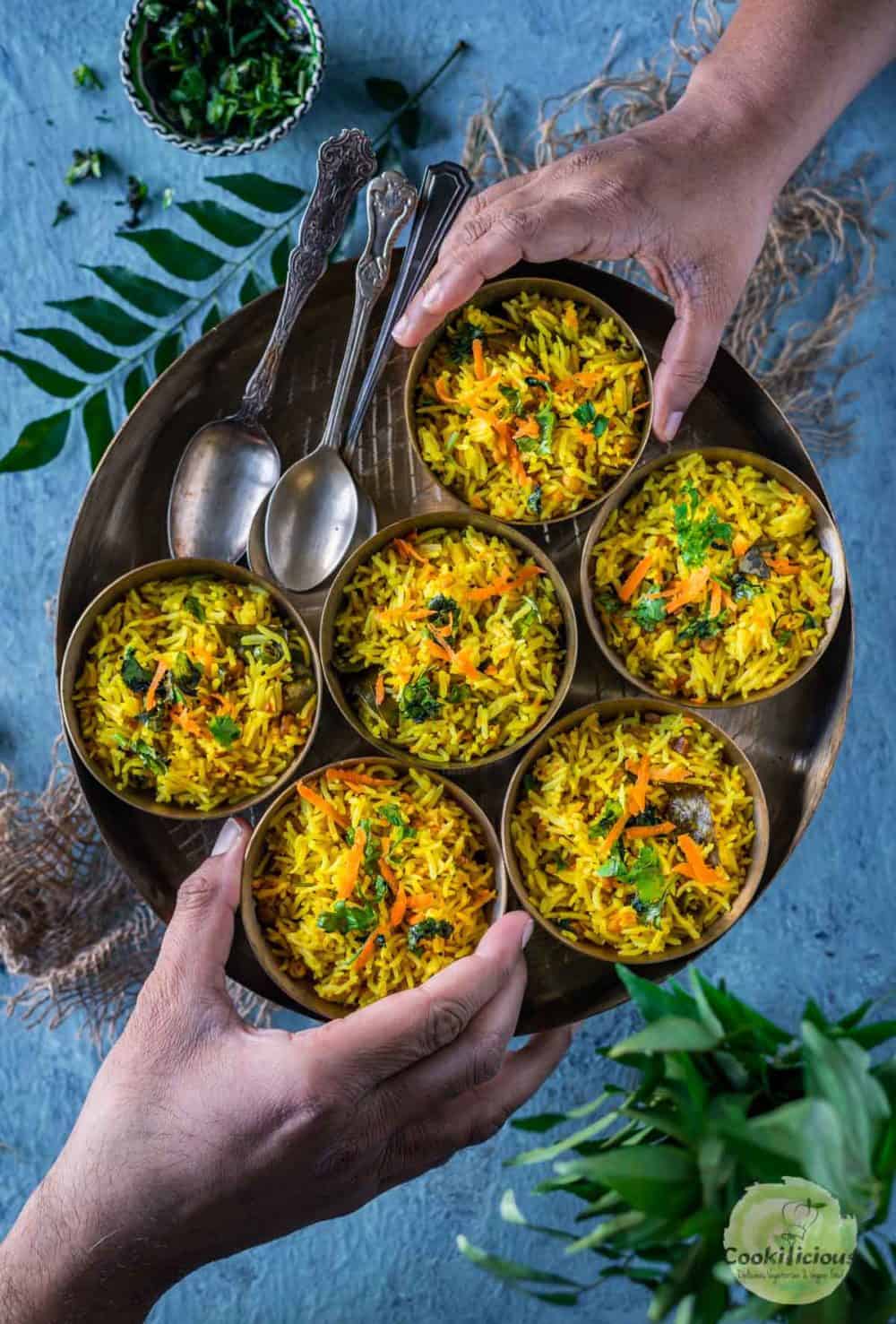 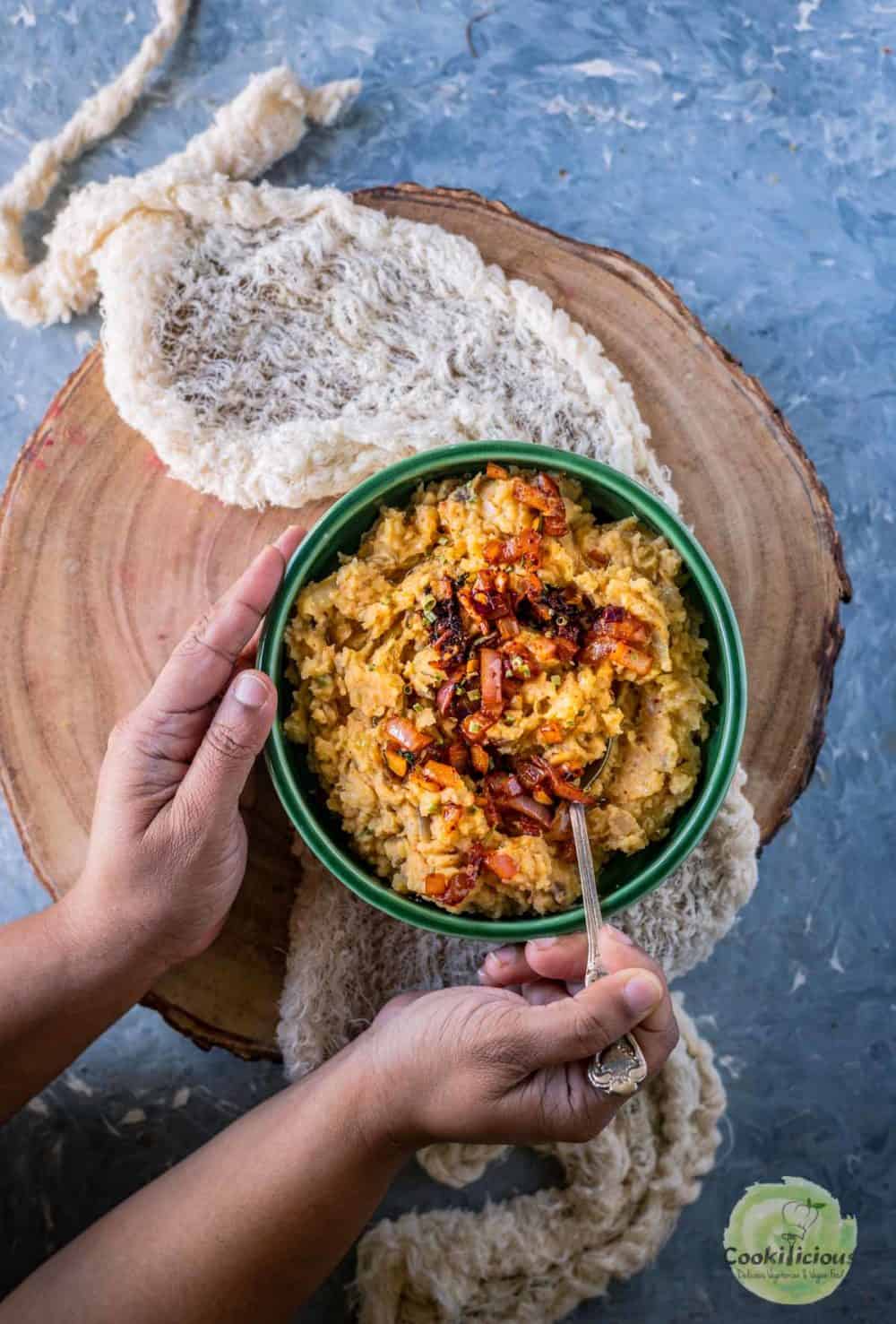 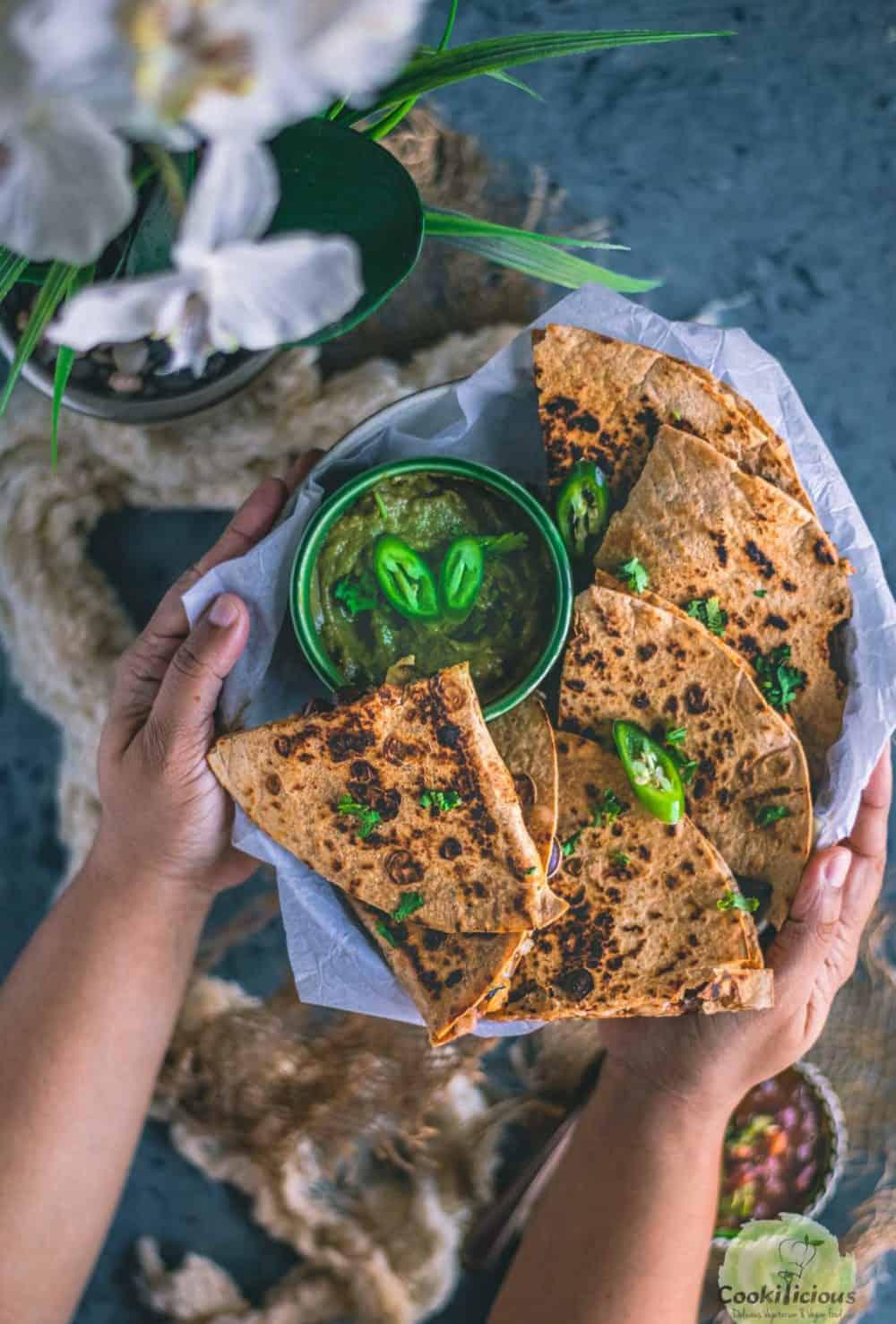 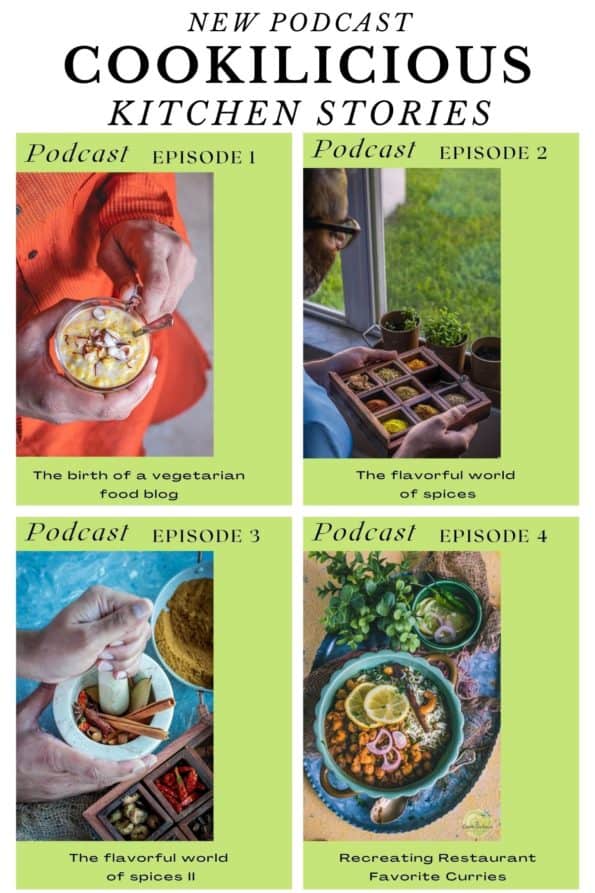